Here’s a delectable morsel for those of you who are clamoring for branding news from the godforsaken realm of the Hot Topic t-shirt rack. That blathering old vampire Marilyn Manson has unveiled a new logo in association with his new album – and boy, does it look an awful lot like an old logo of his former mentor and cryptmate, Trent Reznor. The image above compares the new MM logo with a nineties-era NIN logo that was used on the ‘Sin’ single and other band merch. The two logos use extremely similar shapes to form jagged symmetrical compositions with vertical pillars in the center.

Nine Inch Nails’ debut, the brooding synth-goth masterpiece Pretty Hate Machine, is one of my favorite albums of all time. Reznor has since become known as an early embracer of the digital music industry and an Oscar-winning film score composer. Manson, on the other hand, still makes stuff I guess. Reznor once accused Manson of stabbing him in the back and being a “malicious guy [who] will step on anybody’s face to succeed.” Does this new logo prove that the old bat still has bite? I think the similarities in the designs speak for themselves.

I find this photo of Joey Ramone very moving. Joey was a misfit from Queens whose family wondered if he would ever lead a normal, productive life due to intense social maladjustment and a crippling case of OCD that he suffered with for most of his life. Of course, punk rock transformed him into a rock and roll superhero who used his social anxieties and comic book daydreams as fuel for some of the most exuberant, cathartic songs of his generation. This photo seems to capture that essence of the goofy misfit who achieves greatness. This photo is the most lovable thing since kittens.

I designed this ‘Booty Vision’ shirt (buy the shirt here) for my friends in Planet Booty, the band and performance spectacle by Germart. Germart is the art empire of the brothers Germick; you may remember Ryan Germick from my interview with him. His brothers Nate and Dylan perform as Planet Booty. The shirt portrays Dylan “spying some intergalactic booty.”

Below is a video the boys made to promote a recent performance. I find the video so amusing and that ambient background music so mesmerizing that I’ve watched it ten times. Listen to the Planet Booty record here. 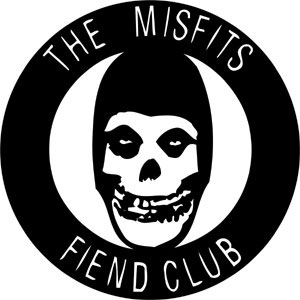 I haven’t been this crazy about a band since I was a Cobain-obsessed teenager. During the last month, my casual interest in early-80’s punk band The Misfits has mutated into a devilish craving. I’m a fiend.

At first, I had written The Misfits off as just another low-fi thrashing experience, but then a series of thrilling revelations occurred. I discovered the band’s taste for sci-fi and horror-themed songs (‘Teenagers from Mars,’ ‘Night of the Living Dead’). They have a song about a werewolf, a song about The Fly, songs about Jackie O. and Marilyn Monroe. I was stunned when I realized the power and range of diabolical Misfits mastermind and frontman Glenn Danzig, “a powerful vocalist who didn’t so much emulate Elvis Presley and Jim Morrison as embody their cocksure attitude and charisma,” according to the iTunes review of the band’s debut. This is a hardcore punk band, led by a melodic crooner styled after Elvis, singing songs about martians and vampires. It’s the strangest hybrid, a creepy Frankenstein creature of a rock band, and the whole thing is utterly hilarious. That’s how I became a Fiend (Danzig named his self-published Misfits fan club enterprise the ‘Fiend Club,’ signing some of his letters to friends and fans with “Stay Cool Ghoul”).

They want your skull.

As early as ’78, the band was already branded with a name, logo, hairstyle (the incomparably inconvenient ‘devilock,’ a lock of hair narrowed into a horn-like sheath that hangs between the eyes), and sound that all thoroughly embodied their signature campy horror style. I dug further and futher, and before I knew it, I was spending way too much time YouTube-ing vintage Misfits clips and Googling nerd-alert search terms like “Glenn Danzig biography” (watch him show off his book collection). After years without a serious new musical obsession, it was a real joy. I love Grizzly Bear but bands like that don’t encourage obsession. If part of your look is being casual and appearing not to try too hard, your fans will probably follow suit. An Interpol tattoo is surely a rarity.

The band’s most well-known song is ‘Where Eagles Dare’

The final revelation came when I started reading Misfits lyrics. Some of the band’s songs are so fast and raw that it was occasionally difficult to hear the lyrics properly, but I soon discovered a lyrical genius in the eccentric meathead-to-be Danzig. I thought I heard a rousing chorus of “I want your soul / I need your soul.” This struck me as a passable, somewhat generic love song. My jaw literally dropped when I learned that the song title was ‘Skulls,’ the chorus was actually “I want your skull / I need your skull,” and the lyrics told a gory tale about a demonic psycopath with a skull collection. Holy shit. If you can see the humor in it, and if you’re a fan of horror films (Danzig was raised on the creepy/silly horror classics from 50’s film production company Hammer Horror), it’s heaven.

Even if you don’t crave more two-minute-long songs about the undead, I recommend being youthful when you can this month. Pursue some of those unbridled passions that can shrink away amidst the stresses and obligations that come with adult things like age and career and time. It’s good for you. Sometimes it takes work to find bands that you adore – research and browsing and recommendations and sometimes years of listening to music you enjoy but don’t always fiend for. But it’s worth it, so find what you fiend for. And remember, as the Descendents once said, “Thou shalt not commit adulthood.”

Here’s a crew of Stephen Kellogg & the Sixers fans wearing the t-shirt I designed for the band’s album The Bear. So cool!

This brilliant gem of a video features legendary punk & metal frontman Glenn Danzig showing off his book collection, including a book of werewolf stories that are “all documented, all true” as well as a book containing “stuff that they ommitted from The Bible.” The shirtless bookworm giggles gleefully as he tells tales of Christ’s angsty youth. Are we in his dungeon, next to the cauldron and the bench press? And what is with that shimmering light on him – is he seated beside a mystical lake of fire? It wouldn’t come as a suprise – in Danzig’s house.

It’s time to pay tribute to a genre that has more great album artwork than it has deliriously fast songs about the most evilest shit a stoned, teen-aged mind can conjure. The genre was epitomized in the early eighties when a handful of drunk virtuosos in skinny black jeans and high-tops decided to call themselves Metallica and play the lean essentials of heavy metal at really, really fast tempos. Other dark lords of the thrash universe include Exodus, Anthrax, Venom, Kreator, Overkill, and macabre masterminds Slayer. Here are the seven best thrash metal record covers of all time.

Forget thrash, this is one of the best record covers in any genre. Turns out the pummeling, cold fist of death is sheer eye candy. Who made that thing? Did it fall out of someone’s nightmare? If you want a couple more reaons to love them, Motörhead frontman Lemmy hoped his band would be “the dirtiest rock n’ roll band in the world” and once said that if “Motörhead moved in next to you, your lawn would die.” 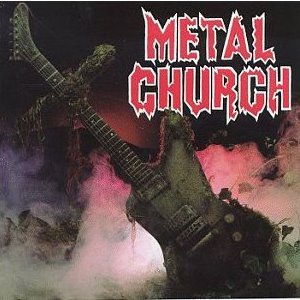 Um, it’s a cruciform Gibson Explorer, zombified in the graveyard of Metal Church. Gnarly. Did they shoot this photo on the set of the Thriller video? Same year. Just sayin’.

I like this cover because it defies the genre. No overwrought Iron Maiden-esque oil paintings, no overt Satanism, zero cheese factor. If anything, you would expect this fucked-up photocopied negative from a punk rock band. The androgynous demon children immediately remind me of Richard D. James and the Aphex Twin video for ‘Come To Daddy’ (directed by Chris Cunningham). Genuinely creepy.

Oh no, it’s your worst nightmare: you’re tucked into bed, wearing your nice clean starched white pajamas because you are a total dickweed poser, and you wake up to discover that you are TUMBLING DOWN A NEVERENDING VAMPIRE MOUTH ‘TIL THE END OF TIME! The essential theme of thrash metal is that each generation of bands has to try and out-evil the last. Eternal Nightmare epitomizes the losers of the evil arms race (hey, not everybody can be Slayer). The boys of Vio-lence failed miserably in their attempt to be insidious and foul; looking at this cover is about as scary as tickling a leprechaun. And that’s why it rules. 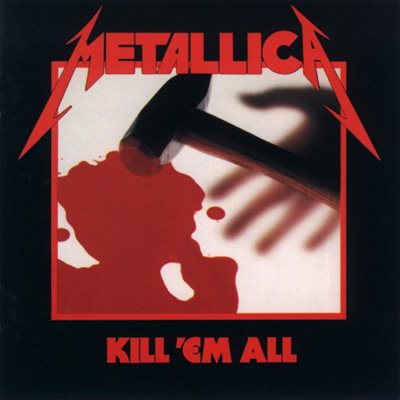 The record is a masterpiece and so is the cover. No wonder they’ve had carte blanche ever since. It’s got the unfuckwithable red-black-white color combination, the photograph is beautifully lit, and the blood puddle has a great Rorschach thing going on. This record almost got called ‘Metal Up Your Ass’ as a goof; thankfully they decided otherwise. Now if only they’d hang up the guitars (and the midlife crises) once and for all. Photo by Gary Lee Heard.

Death frontman Chuck Schuldiner was clearly no fan of subtlety. This cover creeps me out because somehow I feel like maybe you could get leprosy just from looking at it. The real star of this show is the Death logo. Logo design requires boiling a concept down to its distilled essence, but not for Schuldiner, who designed and re-designed this logo himself throughout the band’s career. This incarnation features a spider dangling from its web, a bloody scythe (which is not incorporated into any of the letterforms for some reason), a flaming inverted crucifix, and a shrunken demon skull head thing. Only someone who doesn’t know the rules can break them all and produce something this exuberant. Oh, also check out that sweet nuclear sunset. Artwork by Ed Repka.

Much like the music it represents, the cover of Slayer’s 1986 major label debut made everything that preceded it look like sugar-coated sunshine in comparison. Illustrator and artist Larry Carroll provided the band with a grim cover illustration of Satan-as-goat reigning over a medieval, Bosch-ian vision of Hell. What else would befit an album with a song called ‘Raining Blood’ that opens with the sound of blood rain? I heard this dude Gaahl (from notorious Norwegian black metal band Gorgoroth) explain the meaning of the ‘Satan as a goat’ symbol during an episode of the VBS tv (Vice‘s online video channel) series ‘True Norwegian Black Metal’; he claimed that the goat represents beings motivated by free will, as opposed the rest of us, who are sheep. Being a sheep is lame: you’re a slave to the masses, shackled by ideology and oppressed by tradition. I guess the one cool thing about being a sheep is that, um, you don’t have to rot in Hell for eternity.

The record is a masterpiece and so is the cover. No wonder they’ve had carte blanche ever since. It’s got the unfuckwithable red-black-white color combination, the photograph is beautifully lit, and the blood puddle has a great Rorschach thing going on. This record almost got called ‘Metal Up Your Ass’ as a goof; thankfully they decided otherwise. Now if only they’d hang up the guitars (and the midlife crises) once and for all. Photo by Gary Lee Heard.