I’ve been reading the riveting book Going Clear in advance of the HBO documentary of the same title. Going Clear is a relentlessly damning account of Scientology’s founder and principles. I love to study symbolism and branding, and while I was reading, I wondered, “Does Scientology have a logo?” I hadn’t recalled ever seeing one. Since they identify as something of a hybrid religion and scientific institution, I wasn’t sure whether to expect a religious symbol or a corporate logo from the organization. Upon further investigation, I discovered that Scientology has more symbols than Steven Tyler’s got scarves. Here is a design and symbolism critique of what I found during my research.

This symbol is an ‘S’ (for Scientology, of course) that interlocks with two triangles. According to Scientology, the upper triangle is the KRC triangle, representing knowledge, responsibility, and control. The lower triangle is the ‘ARC’ triangle, representing affinity, reality, and communication. Sounds like a bunch of arbitrary nouns that you might choose if you were inventing a religion and trying to imbue a symbol with knowledge-y gravitas, right? The church’s website explains ‘affinity’ thusly: “Without a degree of liking and some basis of agreement, there is no communication.” On the contrary, I think it’s of the utmost importance to communicate with someone even if you don’t like them – perhaps especially if you don’t like them. But let me stick to design.

I have to admit that this symbol is visually attractive – it looks like what Superman would wear on his chest if he were in ancient Greece (the triangle is the Greek letter Delta). The symmetry is pleasing and the metallic shimmer might hypnotize someone who is easily spellbound by shiny objects. It’s hard to overlook the Registered Trademark icon there – the ever-present reminder that what you are looking at is a legally protected corporate logo and not an ancient symbol of a shared heritage.

Speaking of ancient symbols, here Scientology is co-opting the world’s single most recognizable icon. They are using what appears at first glance to be a Christian cross with an additional central pointed star. However, Jesus Christ does not have a central role in Scientology and this cross is not intended to be affiliated with Christ or crucifixion.

This cross is a derivation of a symbol that has roots in Rosicrucianism and the occult (see the remarkably similar Rosy Cross). Some critics claim that Hubbard’s use of the symbol was directly influenced by his association with infamous occultist Aleister Crowley.

Scientology’s side of the story is that this eight-pointed cross represents eight dynamics, including the urge toward existence as self, the urge to survive through creativity, the urge to survive of the physical universe, and so on. At the end of their web page about the cross, they make a point to say, “As a matter of interest, the cross as a symbol predates Christianity.” It is true that variations on the cross symbol existed prior to Christianity (typically representing crucifixion, early forms of the letter T, etc). However, during roughly the last two thousand years of civilization, the ubiquitous Christian cross has had one primary meaning understood around the world: the crucifixion of Christ. So if Hubbard was seeking a symbol that said ‘eight dynamics,’ why would he choose to appropriate this one?

It was characteristically savvy of Hubbard to use a cross for his modern invention: the symbol brings with it the profoundly potent air of religion. If you are erecting a building, and you want to make sure that it is perceived as a church, what symbol are you going to put on it? Take a good old-fashioned cross, half-customize it with a couple new spires and self-help nouns, and voilà.

I find Scientology’s disclaimer (“As a matter of interest, the cross as a symbol predates Christianity”) rather insulting to the reader. Don’t play coy about the symbolic power you’re co-opting. Besides, if Scientology wanted to re-purpose an age-old symbol with centuries of religious and spiritual uses, they had plenty of other choices (I’m lookin’ at you, swastika). 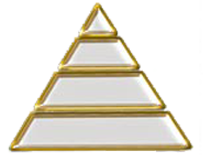 Dianetics is the process that L. Ron Hubbard described in his first breakout religion/self-help book of the same title. He later fleshed out those ideas into the full-fledged religion of Scientology.

Like the Scientology symbol, the Dianetics symbol uses the Greek letter delta, also known as the triangle (read my analysis of subliminal meaning in the Delta airlines logo). This symbol is typically represented in green and yellow stripes: “the green stripes stand for growth, the yellow stripes are for life. The four green stripes represent the four subdivisions of Man’s urge to survive which are delineated in Dianetics.”

Thetan is Scientology’s term for the soul. An Operating Thetan (or OT) is Scientology’s equivalent of what Buddhism calls ‘enlightenment’: it is the state of transcendence of spirit over the material world which is present in nearly all religions. Scientology, unlike Buddhism, makes a point of branding the elite: when practitioners graduate to this advanced level, they get to identify as OT. It’s like seeing the Buddha in a t-shirt reading, “I transcended today. What have you done?” Compared with some of Hubbard’s other logo inventions, which utilize potent ancient symbols, this one is rather straightforward and plain. 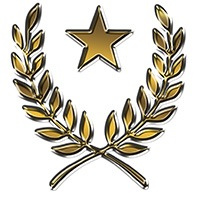 The Sea Org is Scientology’s upper echelon of staff members. Hubbard coined the name during the sixties, when he dubbed himself ‘Commander’ of a small fleet of ships staffed by Scientologists. Going Clear alleges that fleet staff were victims of vicious physical abuse by Hubbard, and that this time period was marked by a myriad of insane international misadventures and criminal acts (including the governmental theft disaster known as Operation Snow White). The Sea Org symbol is very naval indeed: a star over a laurel wreath which would look great on a captain’s hat – or, apparently, a flying saucer.

Hubbard said that the Sea Org symbol was “adopted and used as the symbol of a Galactic Confederacy far back in the history of this sector.” In other words, this is an old alien symbol. An old alien symbol that Hubbard invented in the 1960’s. He goes on to describe that the laurel represents victorious achievement and the star represents a rising spirit. Again, Hubbard proves himself a savvy and clever designer, utilizing powerful symbolism to formalize his ideas and grant them ideological heft.

The alien mythology speaks for itself.

Scientology is a highly contentious subject: Going Clear is only the most recent account of the church’s abuses and misdeeds. Inspecting its symbolism can help us understand its rise to popularity and its surprising staying power.

Part of the reason L. Ron Hubbard was so persuasive to those around him was his vivid imagination and ingenious creativity. He was a very clever wielder of visual iconography, and knew how to use it to grant his inventions the visual appearance of legitimacy. Before he invented Scientology, he was the wildly prolific author of pulp science fiction stories. While analyzing the design concepts that sprang from his imagination, you can see the same clever imagination that informed his sci-fi world-building. In fact, he was really flexing the same muscle here: but this time, he was building a world that he presented as real instead of fantasy.

Much like Scientology itself, this symbolism looks harmless enough at first glance – but upon closer inspection, turns out to be a fabricated facade obscuring creepy, dubious origins.